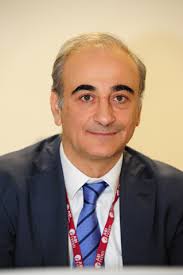 Davide Alfonsi is a Chief Risk Officer from May 2016. He graduated in Economics at the University of Turin in 1988 and is  enrolled in the Register of Chartered Accountants and in the Register of Statutory Auditors.  He started his career with Arthur Andersen, where he built up significant experience in auditing and consulting during his 10 years, working principally in the Financial Sector.  He joined Sanpaolo in 1988 and in the same year he was appointed Head of Risk Control of Sanpaolo IMI. In 2004 he became Head of the Group Risk Management function. In January 2007, after the merger between Intesa and Sanpaolo, he was appointed head of the Group Risk Management Department and in June 2015 he became Group Risk Manager, deputy to the Chief Risk Officer. Among other relevant experiences, he was a member of the CEBS’ Consultative Panel (now EBA) from 2006 to 2010 and was a member of GEBI (Group of Experts in Banking Issues) for the European Commission from May 2010 to October 2011. Since February 2013 he has been the Chairman of AIFIRM (Italian Association of Financial Industries Risk Managers).